Can Our TV Be Fixed? How To Replace the T-Con Board On A Sony Bravia KDL-60R510A!

Watch the video on Youtube by visiting this link!!

Has your flat screen television suddenly started showing vertical lines across portions of the screen? If so there may be a simple, cheap fix available that just about anyone can do. Our Sony Bravia KDL-60R510A started a couple of weeks ago, and today we are going to try to work some magic and replace the T-Con board. Welcome to The Hippie Geeks! If you enjoy this video, be sure to subscribe and leave a comment below!

If your television looks something like this, there are a couple of things that could be happening. Best case, one of the tiny ribbon cables that carries signals has come loose, and just needs to be re-seated. The next best option is that your T-Con board has gone out, and you can simply replace that. The last option is that the panel itself has started to go out, and unfortunately replacing that would cost more than a new TV.

The first thing we tried was opening the TV, and re-seating all of the ribbon cables. We also had to open it up to check the serial number of our T-Con board, as there are several possible boards that were used. Unfortunately re-seating the cables didn’t work, so I hopped over to Ebay and ordered a new T-Con board. When you are looking for a new board, it may be listed for a different television than yours as several manufacturers use the same parts. If you have the model number right, it should work out just fine.

Once our replacement T-Con board arrived, it was time to open the television once again. Opening the Sony KDL-60R510A isn’t hard, you just have to be sure to remove all of the screws, and then gently pry the shell apart.

I started by removing the four VESA mounting screws, then the four screws holding the stand on and then the single screw that secures the power cord. After that there are 11 easy to reach screws around the edges, three on each side and five across the top. After that I completely loosened the six recessed screws along the bottom of the set, followed by the two miscellaneous screws on the right side, one to the right of the inputs and the other in the middle of the inputs.

I then tried to pop the panel apart, and it didn’t work out because I had forgotten to remove the last five screws that are along the bottom edge. Once those are out, you can gently pry the front and back halves of the shell apart. Just be careful not to rip them completely apart as there are still several wires connecting them, but just enough to slide the back shell up, exposing the t-con board.
Before removing the four screws holding the T-Con board and its shield down, you want to undo the cables that come into it. There are two ribbon cables that have a small black flap that needs to be popped up on the bottom, and the two cables with pinch connectors along the top. Once you have those disconnected, remove the last four screws and remove the shield and board. After that, you are simply reversing all the steps to put it back together. Put the replacement board in, hook up the ribbon cables and screw it all back together.

When you have everything re-assembled, it is the moment of truth. Will the TV be functional, or did I just waste $15? Well, in our case the T-Con board was not the issue. With the weird black dots along the bottom of the screen in addition to the lines, I had figured that this was not the problem but it was worth the small cost of a new board just in case. 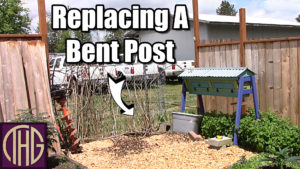 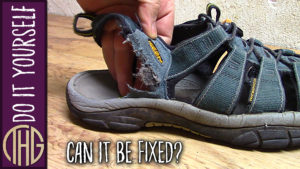 Repairing A Ripped Keen Sandal – Will It Work?