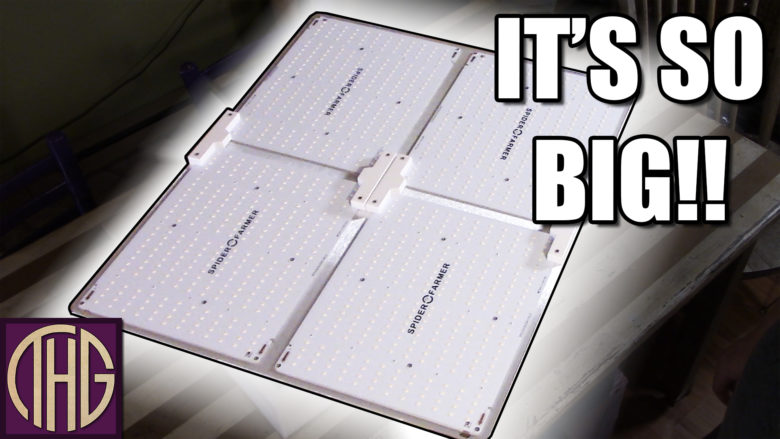 I wanted some bigger grow lights, and then Spider Farmer sent us their SF-4000. Whoa. Welcome to The Hippie Geeks, lets dig into this grow light review.

We just harvested everything out of the big tent, and we are immediately putting this year’s outdoor plants in there for a couple more weeks before they go into the ground. That gives us the perfect opportunity to install and review the SF-4000 from Spider Farmer. They provided this light to us free of charge, but that will not influence the rest of the review. Let’s get into it.

The SF-4000 is the largest light that Spider Farmer currently makes, and it is a beauty. It is the size of two of their SF-2000 lights put together, but with the combined metal back plate they are able to push the power up a little bit, making the SF-4000 end up being slightly better than two of the SF-2000’s separately, which you will see in the numbers later in the video. It is physically 25.5” wide, 24” deep and only 4” thick including the drivers.

Spider Farmer indicates that it can cover a 6’x6’ tent in veg and a 5’x5’ tent in flower, but we will be testing it in a 3’x3’ area, which is one corner of our grow tent. With our previous SF-2000 review, we have been asked for a better comparison between this style of grow light, and the much cheaper blurpie lights. We will be doing that with this video, as we are going to compare the light levels of the SF-4000, two of the SF-2000’s and finally six of our original blurpie lights with a discussion about power draw at the end. With all of the following measurements, remember that the lights were each set up in different corners of the grow tent and tested individually, so the light levels in the corners are going to line up differently depending on where the reflective wall was in relation to the lights.

First up is the star of the show, the SF-4000. It is pulling 450 watts from the wall, is currently listed on their website at $570 and at 12” is pushing 1860 par at the center of the grid. As it is so close to the floor the light can’t reach the edges of the square very well, but that gets better as the light is raised. When you bring the light up to 18”, the center reading sits at 1180 par, and the upper right corner sitting at 690 par. You can tell that is the corner of the grow tent as the reflection from the walls helps raise its numbers. At 24”, the center number moves down to 850 par, with the corners dropping accordingly. Finally, at 30 “, the center reads at 610 par, with an actually fairly even distribution out to the corners.

Now let’s move on to the two, SF-2000 lights hung with a six-inch gap in between them. Each one is drawing exactly 200 watts, is currently listed on their website at $320 each, making two of them them overall a little less powerful and a bit more expensive than the single SF-4000. At 12”, the center is at 1380 par. That is not as high as the single SF-4000, but it does spread its best numbers over a larger area. When we move up to 18” the center Par drops down to 950 with a similar fall off around the edges. Next up is 24” with the center number dropping to 680 par, with the upper left at 490. Finally, we have the numbers at 30”, with the center sitting at 530 par and the upper left at 440 par.

That brings us to the numbers I was most curious about, the six blurpie lights each set about six inches apart. Each light draws 145 watts, making the combined total draw just under 900 watts or double that of the SF-4000, and they run around $300 total for six which would be about half as much as an SF-4000. With the lights set to 12”, the highest number directly under one of the lights is 800 par. The numbers drop off considerably around the edges. Moving up to 18 inches, the be best number drops to 640 PAR while most of the corners actually pick up a little bit due to better light spread. When we move the lights up to 24 inches the best number drops down to 570 PAR with a lot of fall off around the edges. As expected, 30 inches gives us the lowest numbers with the highest sitting at 520 PAR.

Now, those results are not terribly surprising, with the SF-4000 coming in ahead of the two SF-2000’s and the blurpie lights coming in last. Looking at the blurpie lights, the PAR numbers aren’t actually terrible when compared to the Spider Farmer lights. What you really need to look at though, is how much better the power consumption is with Spider Farmer LED’s. The SF-4000 puts out more light than six of the blurpies, while only pulling half of the wattage.

That means that in our grow where we use three corners of the tent with twelve weeks of veg and eight weeks of flower, we will end up saving $390 each cycle. That is an incredible amount of savings on top of the much higher light levels which means not only will we be seeing more growth, but we will be doing it with a much lower cost of operation over time.

I am thrilled that for our next big indoor grow in the fall that we will be using Spider Farmer lights exclusively. They are so much better than what we had before, and when you factor in the power savings it makes them even better. If you would like to try out any of the Spider Farmer products for yourself, we will link their website in the description down below and use code GEEKS to get a discount on your next order.

If this is your first time here on The Hippie Geeks it would be wonderful to have you subscribe! Hopefully digging into this grow light review with us, will help you digging into your next grow light purchace. If you enjoyed this video give it a like and check out our Patreon page or Merch Store to support the channel directly. Thanks again, and we will see you on the next one. 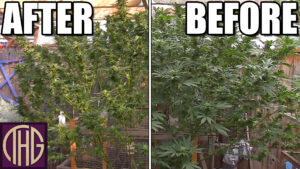 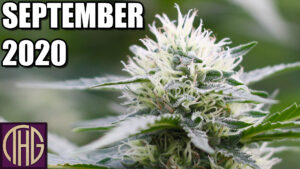 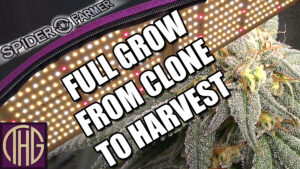